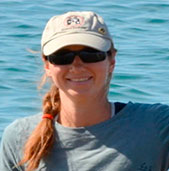 I finished my doctorate evaluating the “environmental effect on different parameters of oxidative and hematological stress in Magellanic penguins from the Patagonian coast”. I am currently pursuing my postdoc on the role of retinoid receptor X (RXR) in the development of intersex in marine bivalves. The objective of my work will be to determine the incidence of the intersex phenomenon (masculinization at the gonadal level due to marine contamination) and to know the gonadal development in the mussel Mytilus edulis and the cholga Aulacomya atra, seeking to relate both processes with the expression of the retinoid receptor X (RXR).

When studying Mytilus edulis mussel and Aulacomya atra (cholga), the objective is to describe gonadal development and its association with the expression of RXR, to determine the incidence of the intersexual phenomenon and the expression of RXR in areas with high and low maritime traffic, and analyzing changes in valve shape in both areas.

Intersex in bivalves can be defined as the simultaneous presence of gonadal tissues of females and males in gonochoric species (eg, spermatocytes in the ovary and oocytes in the male gonad). The presence of pollutants in port areas or located in cities can cause physiological problems in the species that live there.
Bivalves can be subject to a wide range of contaminants for long periods of time, increasing their tolerance to physical and chemical changes in the environment. Their tissues accumulate pollutants easily via filtration, but at the same time their capacity for detoxification and release of pollutants is very low. For this reason, they are good indicators of pollution level and water quality.
The bivalves Aulacomya atra and Mytilus edulis are edible species and are commercialized at an artisanal level in Northern Patagonia. Despite its economic importance, there are no ecotoxicological studies that aim to know the effects on affected populations in areas with anthropogenic activity.
In the port area of ​​Puerto Madryn, heavy metals have been detected in bivalves, particles from TBT and the presence of imposex in several species of snails. Certain pollutants, present in coastal areas with anthropogenic influence, are mostly soluble in lipids, which allows a great persistence within the ecosystem, transport and cargo through the food chains. It is possible to think that the bivalve species M. edulis and A. atra from the port area would be contaminated by TBT. The hypothesis proposed is that TBT contributes to the introduction of intersex in bivalves specific to port contamination, mediated by the expression of RXR and evidencing changes at the gonadal level and in the shape of the valves.
The following techniques are performed for this study, geometric morphometry in order to evaluate the shape of the valves; Immunohistochemistry tests to analyze the expression of RXR. In addition, smears and histological sections of the gonads will be observed under the light microscope to determine the sex and the incidence of intersex.
The specimens will be collected by autonomous diving in the subtidal area of ​​Cerro Avanzado (control of the Golfo Nuevo, Chubut-zone) and near the Luis Piedrabuena Pier (Golfo Nuevo, Chubut-zone contaminated with TBT).