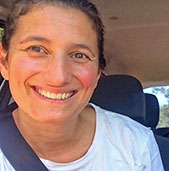 I am a biologist; I got a degree in Biological Sciences at the UNPSJB in Puerto Madryn. Then at IBIOMAR – CENPAT, I developed my doctoral thesis, whose main objective was to compare the morphological variation of the mussel (Mytilus edulis) between and within the productive zones of the province of Chubut and with the mussel imported from Chile. I am currently doing a postdoctoral fellowship in which I intend to characterize the phenotypic stocks of artisanal fishing, using the sea snail Buccinanops globulosus as a study model. The tool to meet the objectives set both in the doctorate and in the postdoc is Geometric Morphometry. The intention of my works is that, using the form, these marine invertebrates are differentiated according to fishing areas and / or crops (among others) and in this way a registered trademark or the designation of origin of these products can be generated whether they are fish or cultivated, highlighting the areas from which they come and generating added value. The latter could not be achieved only with scientific works related to the form, but it will be necessary to articulate with other scientific disciplines as well as with the different local agents involved and in this way do multidisciplinary work.

At national level, official catches of the snail resource have been recorded for more than 50 years. One of the recorded species is Buccinanops globulosus (= Buccinanops deformis) but the reported catches in Chubut are null, although it is caught by hand and consumed since pre-Hispanic times. In recent years there has been an international interest in the commercial exploitation of this resource, but there are still no laws that regulate its fishing. For this reason, it is proposed to identify the phenotypic stocks of this resource in the North Patagonian gulfs, prior to its massive commercial exploitation, in order to generate a morphogeometric baseline that allows determining the origin of these catches. My postdoctoral scholarship project will be useful for the minimum size fishing regulations, which will be implemented shortly by the Chubut Fisheries Secretariat, since the shape of the edible gastropod shell as a bio-marker of provenances will be studied. catches and catches can be detected from places not suitable for consumption, such as from contaminated sites. The selection of this study model was motivated because gastropods in general [i] are subject to different environmental variability and [ii] their wide latitudinal distribution range can be conductive to adaptation to local conditions, since connectivity between populations it can be truncated by both biological and physical factors.