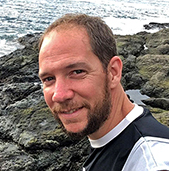 I mainly focus my studies on a peculiar group of animals, the echinoderms (Echinodermata). My main interest is to study the feeding and reproductive adaptations of echinoderms to particular habitats. Also, to understand how these adaptations may be related to the distribution and diversity of different species. I am especially interested on those species inhabiting extreme (e.g., deep water) or anthropogenic (human-affected) environments. For this I combine morphological, reproductive and taxonomic studies with biodiversity surveys and biogeographical analysis.

I am researching the environmental consequences and the role of anthropogenic disturbances on the echinoderms inhabiting the coasts of Argentina. I analyze the diversity and distribution of the different species, comparing the similarities or differences with neighboring regions and examining the existence of latitudinal patterns

Also, I am analyzing the reproductive adaptations of deep-water echinoderm species. These extreme environments represent almost two-thirds of the global area of the planet and, especially in Argentina, they are poorly studied areas. Comparing the reproduction strategies of shallow-water species, I also evaluate the existence of bathymetric patterns.

I am studying the morphology of Ophiuroidea (brittle stars), analyzing and appraising different characters that can be useful to the resolution of the classification of the group. I integrate these results with molecular studies in order to contribute with relevant information to the taxonomic studies.

In parallel, I am examining the different variants existing in the macro and microstructure of the hard parts that form the jaws of the brittle stars, in order to understand their function during feeding. Also, I evaluate the ecological role that these organisms have in marine benthic communities.

Since 2014, I am Associate Curator of the CENPAT Invertebrate Collection, in the Echinoderms section, which is member of the National Biological Data System (SNDB) and part of the Global Biodiversity Information Facility (GBIF).

Finally, I participate in different scientific divulgation activities. I am member of ProyectoSub, an initiative that aims to promote the transfer of scientific knowledge of marine invertebrates to society and thus to promote the conservation of these organisms and the ecosystems in which they live. I am also co-author of the book on “Marine biology” published by Eudeba, aimed to general public, and especially to students interested in the subject.