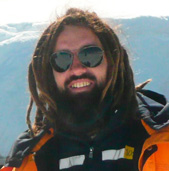 My research focuses on marine nemertine biodiversity, a poorly studied taxa in Argentina. The main goal of my research is to characterize the nemertean fauna using morphological and molecular characters, to determine the nemertean biodiversity of Argentina and the phylogenetic relationships between species. Another major focus of my research is to study the ecological role of Nemerteans in the benthic trophic assemblies, with special attention to those species that live in symbiotic relationships with other invertebrates.

Nemerteans are common invertebrates in marine environments, with at least 1,300 species described worldwide. However, despite the cosmopolitan distribution of the taxa, knowledge on the biological diversity of this group is polarized, with only 30% of the records in the Southern Hemisphere. Along the Argentine coast, the number of Nemerteans species described is particularly low (8 species) although their diversity is much higher. This scenario has motivated me to study this group of invertebrates with great potential for taxonomic studies. My research focuses on the description of new species through their morphological (histology) and molecular characters (COI, 16s among others). With these molecular data and the other species around the world, I can describe the phylogenies of these species and the evolutionary history of the group. Furthermore, it may be possible to infer dispersal patterns through biogeography of the species, as well as to establish which species are endemic to Argentina and which are exotic. Another aim of my research is the study of larval development which will compliment studies of dispersal and reproduction of the described species. I am also interested in the ecological importance of Argentinean nemerteans in the ecosystem and the role they play as predators in the trophic assemblage.