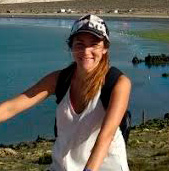 My work focuses on the effects of physical stress on rocky intertidal and subtidal gastropod populations, based on morphometric patterns and physiological responses. I compare populations of two gastropod species within two zones with different physical stress. I am also interested in the potential impact caused by climate warming on these populations, I experimentally manipulate environmental variables and quantify morphological and physiological changes. I have also previously worked on the fishing potential of gastropod species within Patagonian Gulfs.

Physicochemical conditions in rocky inter-and subtidal environments: Rocky intertidal environments are highly variable; they are characterized by a wide range of physical conditions, and in Norpatagonia these conditions are among the harshest in the world. Intertidal species are subject to a complex gradient of conditions, I am particularly interested in studying the effects of wave exposure and tide cycles on gastropod species that have a broad distribution range that include inter- and subtidal habitats. Survival in intertidal environments requires a large investment of energy for protection and cell maintenance. On the other hand subtidal zone populations are exposed to more uniform physical conditions, they are not adapted to daily changes in moisture, temperature, wave force and salinity. In order to analyze the dynamics of intertidal and subtidal habitats we periodically collect physicochemical data of pH, salinity, temperature, moisture, energy of waves and roughness of the terrain. I want to compare inter and subtidal conditions inhabited for T. geversianus and T. patagonica in different rocky intertidal zones.

Morphometric analysis of gastropods: An adaptation that many marine animals have to be protected from desiccation during low tide is to retreat into their shells tightly. However, ocean acidification and rising sea temperatures caused by global warming reduce the availability of calcium carbonate (CaCO3). That’s why ocean acidification will affect all organisms that have carbonate structures. Changes in calcareous structures can be analyzed through the use of geometric morphometrics of gastropod shells. I am interested in comparing shell structure of subtidal and intertidal populations of T. geversianus and T. patagonica and those experimentally subjected to future ocean acidification conditions.

Physiological analysis of gastropods: Vertical patterns in species distribution are commonly related to gradients in temperature. This is because of its ubiquitous effects on the rates of physiological processes and the integrity of macromolecular cellular structures. The synthesis of macular chaperones like heat shock proteins that stabilize denaturing proteins was proposed to be an important indicator of thermal stress. There is a positive correlation between the rate of survival and the ability to synthesize heat shock proteins in organisms that live under thermal stress. To evaluate if the differences between the physical stress in intertidal and subtidal populations generate distinct physiological responses, we study the thermal response of T. geversianus and T. patagonica naturally and experimentally by measuring the concentration of heat shock protein HSP70.